Coming from a sold out venture of paying tribute to Smokie in 2019 and now back by popular demand, Gareth James (Vocals and Guitar) and his band will be touring throughout South Africa in 2022, to pay tribute to these legendary 70’s RocknRoll bands known as, “Smokie” and “Creedence Clearwater Revival. 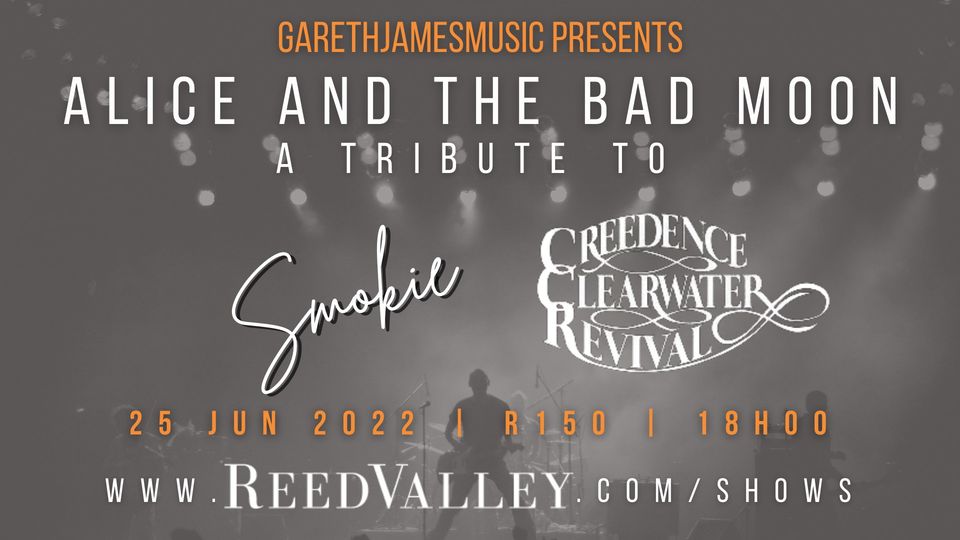 The show is called “Alice and the Bad Moon” and will feature the hits known, “Oh Carol”, ”Bad Moon Rising”, “Don’t Play Your Rock ‘n Roll To Me”,“Have You Ever Seen The Rain?” and “Living Next Door To Alice” to name but a few.
Smokie’s Success:
"• Over 13 Top 20 hits in the 70’s
• Played to more than 20 million fans
• Sold over 20 million records worldwide
• ‘Living Next Door To Alice’ has sold over 10 million copies

To be rock 'n' roll survivors is an achievement. To be Europe's top live band, forty three years after its inception is truly fantastic; but to still be enthusiastic, fresh, totally committed and in love with the music is a positive miracle.
At ReedValley Farm, Mossel Bay
Doors open 18h30
Show Starts 20h00