The History of Knysna 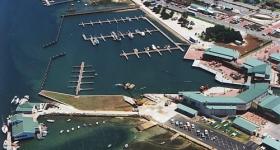 The Khoikhoi ("people people" or "real people") or Khoi, are a historical division of the Khoisan ethnic group, the native people of southwestern Africa, closely related to the Bushmen (or San, as the Khoikhoi called them). They had lived in southern Africa since the 5th century AD. When European immigrants colonized the area after 1652, the Khoikhoi were practising extensive pastoral agriculture in the Cape region, with large herds of Nguni cattle. The European immigrants labeled them Hottentots, in imitation of the sound of the Khoekhoe language, but this term is today considered derogatory by some.

The Khoikhoi named a local river in the area by a word that sounded like "Knysna" to the early Europeans. Scholars offer several translations of the Hottentot term - place of wood, fern leaves, or simply straight down, referring to the steep sandstone cliffs, called The Heads today.

Knysna's rich and colourful history spans the days of sailing ships, timber extraction and even a brief period of gold discovery. The vast, indigenous forests just outside Knysna became an invaluable source of timber for buildings, ships and wagons. The town's streets and quaint, old buildings show its recent commercial past, while the rocky coast and deep, silent forests reflect the history of men with bows and arrows - ancient hunters, gatherers and nomads.