De Rust is a small village nestled between the Swartberg and Kammanassie mountains on the quiet and scenic Cape Route 62 tourist route, between Oudtshoorn (35km) and Beaufort West (145km). 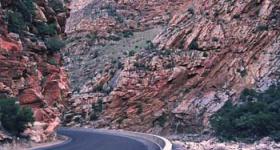 De Rust's economy consist largely of agriculture and tourism, and the town is known for the meandering and spectacular Meiringspoort (Meiring's canyon) pass that starts 2 km outside the town. Its towering red sandstone cliffs form a gorge with a 25 km road crossing the same river 25 times in its span. This massive natural cleft through the seemingly impenetrable Swartberg Mountain range, forms a convenient link between the Great and Little Karoo.

De Rust might be small but it is charming and is famous for its dessert wines and cheeses. The town itself is tranquil and its tree-lined streets boast excellent examples of late 19th century architecture. 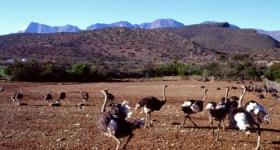 In recent years the slow pace of life and clean fresh air has become a popular country escape for artists. Apart from tourism the other major economic contributor is farming with a large portion of the population involved in ostrich, seed and tobacco, wine, cattle, lucerne and milk farming. 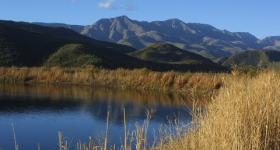 The area is malaria-free and it has a fantastic climate, beautiful sunny days in winter while summers are mild to very warm. Average midday temperatures range from 17°C in July to 30.6°C in January. De Rust normally receives about 240mm of rain throughout the year.