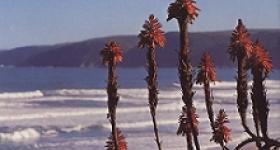 The route of the famous Outeniqua Choo Tjoe Steam Train is world renowned, but sadly mainly due to the cost of repair after serious rain damage, the train no longer runs through Wilderness between George and Knysna.   The N2 highway between George and Wilderness however was repaired and upgraded. The famous Dolphins Point is a must stop and offers a spectacular panoramic view of Wilderness beach all the way to Sedgefield. On a clear day one can see all the way to Knysna Heads.  Wilderness beach is a haven for beach lovers and peak season will bear testimony to this fact.  The coastline becomes visible essentially from Kaaimans and then from the road most of the way between Wilderness to Sedgefield.

Dolphin's Point at Kaaimans provides parking for eager tourists to view thew spectacular view. During whale season, whales can often be seen as are dolphins. The high lookout point is ideally situated and is accessible from both sides of the usually busy road.  The now unused Outeniqua Choo Tjoe railway line can be viewed from Dolphin's Point. Wilderness is always a hive of activity with restaurants, craft markets and curio shops along the way  toward Sedgefield. Sedgefield has a first weekend of the month craft market, which is extremely popular amongst locals and plenty of interesting trinkets as well as food and entertainment for the whole family can be enjoyed. 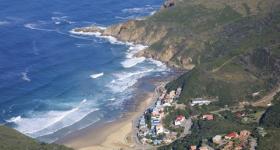 A natural beauty spot, is another of the locals’ favourite beaches, situated about eighteen kilometres south-west of George on the Mossel Bay Road. Offering very safe, protected sea bathing and a tidal pool, Herold’s Bay is not only popular for its open beaches and interesting rock pools but is well-known for its fishing spots.

The bay has a small hotel, cozy caravan park and a luxury self-catering resort. Many owners also make their homes available to holiday makers throughout the year. 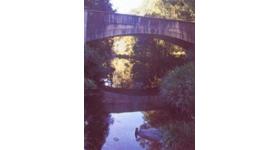 In 1843 Major Mitchell, Surveyor General of the Cape Colony, suggested that convict labour be used to build a good road over the Outeniqua Mountains, the one which was to be called the Montagu Pass. This was approved by the Hon. John Montagu, Colonial Secretary, and in 1844 work was started on the new pass.

About 250 convicts tackled the arduous task of building the new road. They were housed in two camps, the South station and the North Station. The job was completed at a cost of R71 598-00. In December 1847 the pass was opened for traffic, but the official opening only took place on 19 January 1948. This was a festive affair, and the Hon. John Montagu personally opened the pass which was to be called after him. 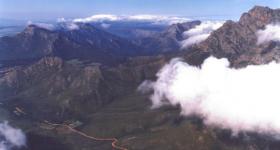 The passage over the mountains, which used to take a full three days over the tortuous Cradock Pass, could now be accomplished within three hours (Today it hardly takes 15 minutes by car).
The engineer in charge of the work was Henry Fancourt White, an experienced road engineer from Australia, who was imported by John Montagu for the work. Henry Fancourt White’s name is perpetuated in the lovely estate, Fancourt (his mother’s surname) and in the village of Blanco. In honour of this very capable engineer, the Hon. John Montagu suggested that the little hamlet which grew up atthe foot of the pass, be called White or White’s Village. This was later changed to the more euphonious Latin word for ‘White’ - Blanco.

Originally the toll was one penny per wheel and one penny per ox. After the Tollhouse you come to the Montagu Pass Bridge. The older generation knew this as the Keurrivier se Brug - due to the Keurbome which grew here in profusion.

The Divisional Council succeeded in having this old stone bridge, so artfully build, declared a National Monument. The whole Montagu Pass has also been declared a National Monument and the signposts marking the historic spots along the way were erected by the Divisional Council at the suggestion of the George Museum Society.
The vicinity of the bridge is supposed to be haunted by a man in a grey suit. Having crossed the bridge, you now approach the pass proper, with its stone wall all along the one side. The wall has unfortunately been badly damaged in parts. You will notice that on some parts of the wall the lower row of stone protrude slightly. This was done to prevent the axles of the wagons from scraping against the walls and thus becoming damaged. 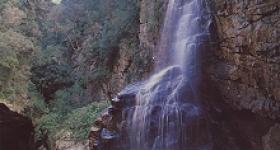 The road up the pass is rather narrow and wagons could not pass abreast. Consequently the old drivers had to whistle and shout and crack their whips continuously to warn one another of their approach. The narrowest part of the pass with overhanging cliffs was called Die Noute. Going up the pass you will notice a huge rock to the left, just off the road. This is called Moertjieklip. According to the old-timers this rock was dislodged during the building of the railway line higher up (some maintain it was during the building of the pass itself). It rolled down the mountainside, pinning one of the labourers underneath and crushing him to death. One has to know Afrikaans in order to appreciated the aptness - rather rough humour of the name Moertjieklip. The next place you come to is Boshoff se Draai. According to the late Mr Beb de Swardt a certain Boshoff used to tell all and sundry what a good "touleier" he was. Leading a span of oxen was of course quite an art, it needed exact timing and deft manipulation to manoeuvre a wagon and span round a bend. Then one day the bragging Boshoff miscalculated this particular bend in the road with the result that he landed on the horns of the fore-ox and was tossed over the wall. After this you find to the left, the ruins of the old smithy. When most of the little buildings were still standing, the Museum Society recommended that it be declared a National Monument.

This was done, but before restoration could be tackled, trespassers had carted away most of the stones. So today we are left with only the ruins of the old smithy. Here the implements used in the building of the pass were sharpened and repaired. Convicts working on the pass were also stationed here under guard. (In the Museum there is a lovely photo of this little building in its heyday).
Now follows the Haarkantdraai - the bend where the road curves towards the right. Next you come to that part of the pass which taxed every poor beast ascending the pass to its utmost, namely the Regoptrek.

This is the steepest part of the road. Having mastered this, the old-timers allowed themselves to relax for a while at Grog-Draai. The name speaks for itself. For those not in need of a strong sustenance, there was always the lovely cool water from a bubbling spring nearby.

Then you come to the Hotkantdraai where the road curves towards the left, and to Witkop se Draai from where you have a view of the white koppie. The name, Witkop se Draai, alludes to the colour of the soil. Where the road passes underneath the railway bridge, you have Stinkhoutdraai. Stinkwood trees used to grow here in profusion. Further along the road, on the right, we find the old wagon tracks cut into the stone by the wheels and remskoene (brakes) of the wagons descending from the old Cradock Pass.

And then at last, you reach the hotel at North Station. The oldest part of the ruins probably dates from approximately 1840, i.e. before the building of the Montagu Pass, and housed visitors from the days of the Cradock Pass.