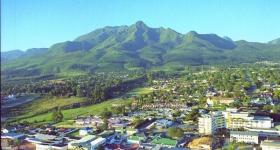 The town of George is central to South Afrtican Garden Route in the Western Cape province and is the sixth oldest town in South Africa - the first founded under British rule - and was named after the reigning monarch in 1811, King George III. The Outeniqua forests were the reason the Dutch East India Company, in 1776, established a woodcutters outpost on the site of what became George in 1811. It was declared a drostdy by the Earl of Caledon on 23 April 1811. George gained municipal status in 1837.

The building shown on this photograph was situated at the corner of York and Hibernia Streets, George, where the Old Mutual Building now stands, directly opposite the Standard Bank. This photograph records the opening of the late H.J 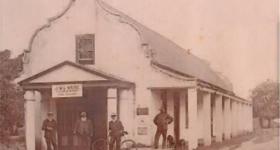 Raubenheimer’s legal practice in 1906, when he joined the practise of Mr J.W.L. Krige. This practice was taken over by Mr Raubenheimer on 1 June 1907 when Mr Krige moved to Mossel Bay. The persons in the photograph are from left to right-   Mr Raubenheimer, Adam Barnard of Rondvlei (the first client), Mr Krige and J.T. Ferreira. The pharmacy of J.H Morris & Co. was later erected in Hibernia Street where the tree on the right is shown. Photo: www.raubenheimers.co.za 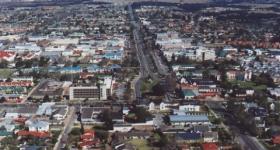 Walking down York Street (named in honour of the Duke of York, second son of King George III) two doors from the library, is House Crowther, one of the last survivors of the stately homes which once flanked York Street. Dr Charles Owen-Snow, who practiced as general and district surgeon from 1895 to 1940, lived in this distinguished home with his family. Medical instruments used by him are on display in the museum.
Photograph courtesy of Studio Atrium.

During 1812 two missionaries from London, namely James Read and William Wimmer visited Hoogekraal near George. Kaptein Dikkop, leader of the Khoikhoi tribe living in the area, was so impressed with their work that he invited them to come and live and work amongst his people. The Khoikhoi were a semi-nomadic race who cared only for their cattle and sheep and spent the rest of the time sleeping in the sun. Nothing was done to civilize or Christianise any of these people and the farmers were averse to any education or upliftment of their non-white neighbours - the "Bag-Carriers" of the Southern Cape. 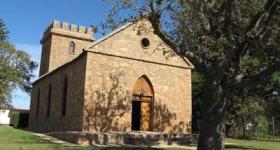 Despite all the efforts of Kaptein Kikkop to spread the gospel amongst his followers, he was buried outside the mission’s burial ground about 100 metres from the church. The reason was apparently that he had never converted to Christianity.

His grave, a national monument, may still be seen near the burial grounds. Rev. Charles Pacalt, Rev John Brown Milne, Rev Anderson all lie buried in this peaceful spot. Epeneta Jantze is the only member of the Khoikhoi tribe who was buried with them in the mission’s acre.

Pacaltsdorp is richly endowed with historic buildings. An impressive site for visitors is the unique Norman-style church with its meter thick rough stone walls. It was originally built from stone, yellowwood, glass and clay. From the tall, square battlemented Norman tower, kilometres of countryside may be viewed. The "Pata Huisie" as it became known during 1922, was constructed in approximately 1813 by Rev Pacalt as his second mission cottage. Consisting of sod walls, a thatch roof and cow-dung floor, it was declared a national monument in 1976. William Anderson built the first manse, next to Pacalt’s little two roomed cottage. A two-storied building with thick stone walls and abundant yellowwood, it was also declared a national monument in 1976. 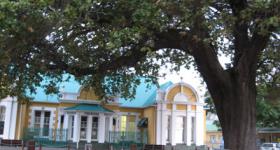 The ancient English oak in front of the Old Library is one of the original trees planted by Landdrost van Kervel when he laid out George Town in 1811 which withstood the test of time. It is now known as the ‘Slave Tree’ because of the old chain embedded in the tree trunk and the old lock attached to it. The Slave Tree is said to be the biggest oak in the Southern Hemisphere and has been declared a National Monument. 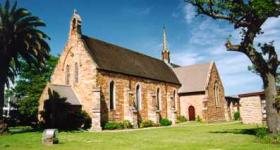 During a visit to George in 1848, Bishop Gray convened a meeting to discuss the building of a church, plans for which had been prepared by Mrs Gray on the lines of the church at Littleworth near Oxford. Photograph courtesy of Chris Daly. View images of historic Garden Route Churches at: http://www.paradisefound.co.za/lifeofchrist/

On December 7th 1850 Bishop Gray consecrated the church and in 1911 Bishop Sidwell, the First Bishop of George, was enthroned, giving George its status as Cathedral City. The Cathedral contains many interesting memorials and perhaps the most fascinating feature is the number of glass stained windows in relation to its size.

These include two by Kempe, three by Geoffrey Webb and four by Sir Hugh Easton. All were famous overseas artists of their day. Most of the stone for the church came from a quarry, now filled in, situated in the paddock at the turn-off to Carmel.

The dressed stone came from Oudtshoorn. In the churchyard to the rear of the Cathedral are a number of historic graves; Bishop Sidwell, Henry Fancourt White, the builder of the Montagu Pass who died in 1866 and Major H D Warden who founded Bloemfontein while serving as British Resident of the land beyond the Orange River.

Across the road from the Cathedral, set in beautiful grounds, is Bishops Lea designed by the famous architect, Sir Herbert Baker.

At the corner of Hibernia Street and York Street, enter George’s royal mile of commerce to feel the pulse of a town where the colonnaded facade of the Standard Bank rubs shoulders with its contemporary neighbours.

In 1837 George gained Municipal status. During that year the Municipality imposed a local property tax of 7s 6d (75c) on each erf and the total income from this source amounted to R78-00. Turn east in Market street where the first Town House (now a restaurant) was completed in 1847. To mark George’s centenary in 1911, a memorial Town Hall was erected on the corner of Market and York Streets. This building now houses the Town Engineer’s Department.

The imposing Civic Centre in York Street was completed in 1964 to mark the 150th birthday of the Town. This gives a unique and surely, unprecedented situation of three halls, symbolizing birth, growth and maturity, all standing within a stone’s throw of each other.

In 1877 there stepped into the quiet scene of George a far-visioned young lady who shaped the cultural upliftment of generations to come. Her name - Miss Christina Petronella van Niekerk. The glory of her work is remembered when looking at Hurteria, Oorskotjie (next to Hurteria) and the now Arts Theater which once was the commodious accommodation of her famous First-Class Public School for Girls. 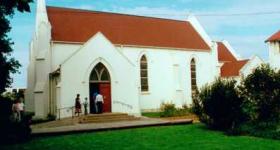 This is the oldest Roman Catholic Church in the country and is found in the oak-lined Meade Street. Turn left at the intersection of Meade Street (named in honour of the wife of the General Sir John Craddock (where on the left hand side is the Roman Catholic church - built by Father Deveraux with the aid of a carpenter and some labourers. The church was completed in 1843 at a cost of R682-00. 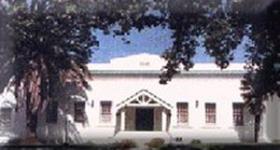 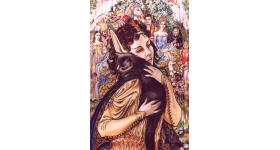 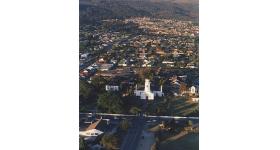 Perhaps one of the loveliest sights is the Dutch Reformed Church at the head of Meade Street framed by the gracious oak trees which line the street with the mountain as a backdrop. The cornerstone of this historic "crosschurch" was laid by the Rev Johan SS Ballot on 14 April 1832. The excavations for the foundations were six foot deep by five foot wide so as to "bear the heavy burden" of walls three foot thick. Photograph courtesy of Studio Atrium.

Building material consisted of 180 wagon-loads of foundation, paving and flat stones and 1,896,756 bricks. Bricks made by members of the congregation in their own kilns have not been taken into account.

The enormous amount of yellow-wood (the ceilings, the pillars supporting the galleries and the panelling of the galleries) and the stinkwood used came from local forests, Plettenberg Bay and Knysna. The teak door of the main entrance was brought from Cape Town to George by oxwagon. The pulpit, designed and constructed by Mr Heyns who finished the task in a year, is made from local stinkwood at a cost of R400. The original roof was made from reeds which, like the lime used in the building, came from Riversdale. 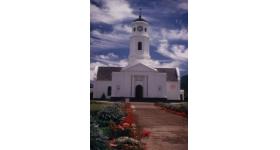 Disaster struck the community when the church steeple collapsed on 13 September 1905. Rain had been blown through the open windows for years and had weathered the woodwork and weakened the walls to such an extent that the ten inches of rain that fell during three days caused the brickwork to crumble. The present bell was bought at the time of reconstruction and the London firm of Philipson and Stow presented the steeple clock.

The historical old sundial next to the path of the main entrance was erected by surveyor Edmore one and a quarter centuries ago. Turn west once more into Courtenay Street (named in honour of the wife of Lord Charles Somerset) and you are in sight of the Drostdy from where your tour commenced.