Aside from the breathtaking ocean views, sun kissed beaches and amazing plant life, the quaint towns, villages and coves along the Southern Cape coastline are the real attraction to one of South Africa’s most popular tourist destinations, the South African Garden Route and Klein Karoo. Each village or town boasts a unique character and experience promising 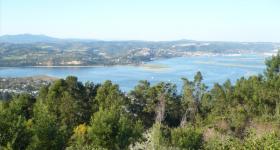 tourists a glimpse of South Africa at its very best.

From the majestic Tsitsikamma Forest to the arid beauty of the Karoo, from the magnificent Knysna Heads to the astounding stalagmite formations found in the Cango Caves, the South African Garden Route offers a wonderland of unmatched beauty.

The quaint suburb of Brenton is approximately 12Km east of Knysna. Named after Sir Jaheel Brenton, the British admiral who opened Knysna harbour, Brenton is separated into Brenton, on the Western shore of the Knysna Lagoon and Brenton on Sea, which lies on the shores of the Indian Ocean. On the road to Brenton on Sea, Margaret’s Viewpoint provides a 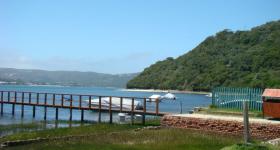 majestic view of the Knysna Lagoon, Lake Brenton and Belvidere Estate. The lookout point is named after well known and loved Knysna conservationist, Margaret Addinal, who persistently campaigned for the view point installation, in an effort to remind us, who stop to enjoy the panorama, that we are merely brief visitors and our life on this planet is but a fleeting moment in time and what a privilege it is, to be considered worthy of nature’s gift.

The quaint suburb of Belvidere Estate is approximately 8Km west of Knysna, on the western shore of the Knysna Lagoon, just before Lake Brenton. In 1833 the farm named Belvidere, was purchased by Thomas Henry Duthie from his father-in-law, George Rex, the "squire and proprietor of Knysna" and timber merchant, who had acquired the land in 1830. Duthie had married Rex’s third daughter Caroline and much of their history is visible at the Belvidere Manor Hotel, which today is a popular romantic getaway. Belvidere Estate, now an established suburb of Knysna, with its lagoon views and peaceful surroundings, is considered prime real estate in South Africa and every property investors dream, as growth over the last few years, has shown persistently good returns. 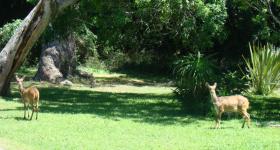 Brenton as a holiday destination in Knysna, South Africa has plenty to offer. On the shores of the Knysna lagoon, water sports are a given. From fishing and skiing, to idyllic houseboat rides on the Knysna Lagoon. Breton is far enough away to be serenely peaceful, yet close enough to Knysna central to enjoy one of South Africa’s top holiday destination’s continental flavour. Knysna is considered the pearl of the South African Garden Route for good reason. Persistently competing and winning small town of the year awards, Knysna is always a hive of activity, offering popular restaurants, cultural and antique stores, clubs and pubs and let’s not forget the unforgettable Knysna oysters. 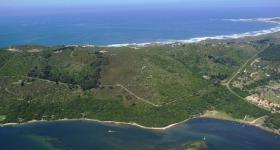 Brenton is one of those unique places that instantly becomes an imprint of absolute wonder in your mind. The road away from Brenton, with its majestic views sea views from the Knysna Featherbed to Buffalo Bay, leaves one with an unmistakeable feeling that if there is a perfect and peaceful dwelling place on this earth, then Brenton would be amongst the few considerations.

How to get to Brenton 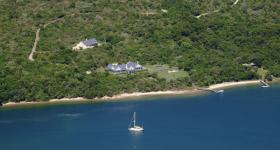 From Cape Town travel east along the N2 until you reach Sedgefield. Some 8Km past Sedgefield at the Knysna Lagoon bridge turn left off Main Road into Belvidere Street toward "Brenton". The Belvidere Street turn winds back down under the bridge and on toward Brenton past Belvidere Estate, which is approximately 7Km along this road.