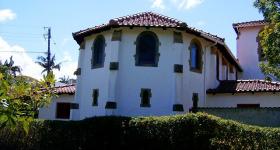 The small town of Groot Brak was established in 1859, but it was not an easy place to live in during those early years. The surrounding hills had its fair share of wild animals and then of course there was the ever-present river. Difficult to cross, it caused havoc with untimely flooding and fluctuating levels. Someone eventually decided to build a causeway over the river and a Richard Searle and his family were sent from Cape Town to be the first toll keeper. 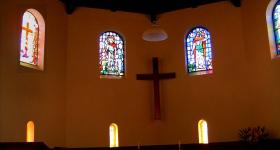 To make a long and eventful story short, the Searle family eventually became the backbone, as it were, of the Groot Brak community. Today one can view the remains of their legacy: the shoe factory, still in operation: the hydro-electric power station which supplied the first electricity in 1924: beautiful Victorian homes and buildings and the Searle's Memorial Church or as I prefer to call it: the little cathedral. It was completed in 1930. The Searle's family was God-fearing people and the Searle's Memorial Church was the end result of years of prayer and dedication. 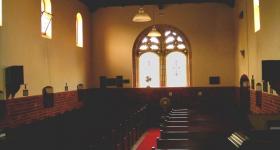 Pushing the heavy doors open, my first impression on entering the sanctuary was one of tranquility and peace. I sat for a few moments in a pew soaking up the cool silence while staring up at the dark rafters and wooden ceiling. They seemed awfully remote through the filtered light and must it have taken some ingenuity placing them.  The alter, railing and pulpit, of dark wood, are fairly simple constructions, yet are very significant beneath the large cross against the wall above them. I walked up the aisle admiring the lead windows and their stained glass and couldn't help noticing how thick the walls are. Two small rooms lead off either side of the haven near the pulpit: one being the vestry, the other a small kitchen-come-store. A simple, yet beautiful place of worship with a Presence that's almost tangible. 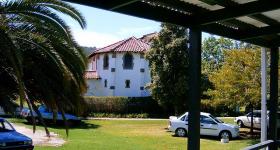 Outside and at the rear of the cathedral lies a lovely stretch of lawn shaded by indigenous trees. I was rather disappointed to hear that plans are being passed to erect a large hall which will obliterate any sign of a garden or lawn. So much for progress. Access is available at all times as the Janitor resides next door in the old Manse. A visit would be really worth your while.

Groot Brak has much to offer. Most of us usually just rush past seldom giving a second thought to the historical value of the town. There are lovely and interesting walks, a small museum with lots of interesting curious and photographs of the days gone by, the largest known pepper tree in South Africa and lots more. There's the Wolwedans Dam which now controls the flooding besides supplying water. The best thing to do would be to visit the museum and discover what's available.