NEON DREAMS, the Canadian phenomenon, live in Knysna for the first time ever!

Frank Kadillac doesn’t think he should have turned out to be a good person. His mother had him when she was 17; he endured hardships growing up; he never stayed in one place long enough to make friends, and went to 10 different schools. This made him an easy target for bullies but he persevered, and now is dedicating his life to make sure others can overcome hardships too. Neon Dreams is the vessel for that message. Kadillac and drummer Adrian Morris have been making music together under that moniker since 2015, but it wasn’t until last year that Kadillac realised his true purpose. 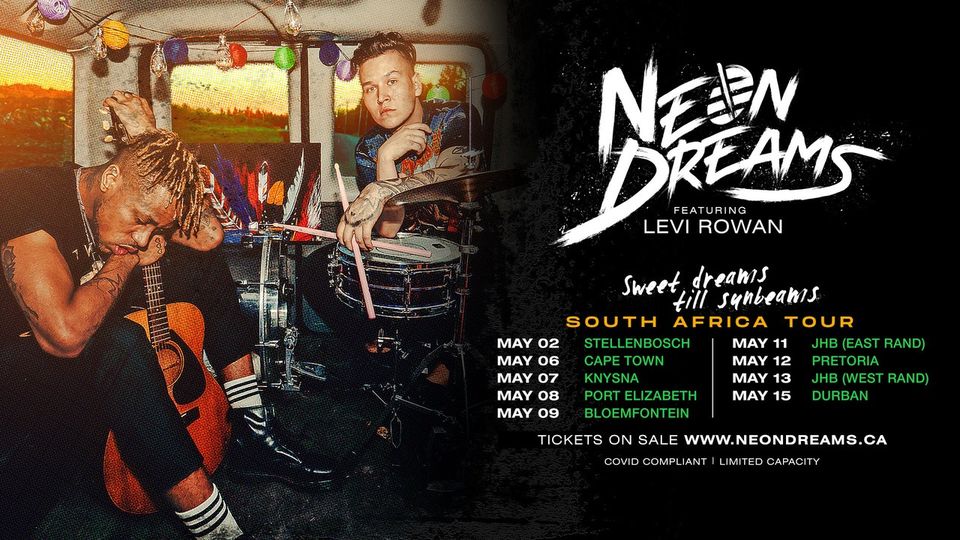 They mix rock with pop sensibilities, and at times Kadillac rap sings. He also gives a nod to the hip-hop community by referencing other artists’ lyrics in his own. “I like triggering people’s memory when they hear something that’s familiar to them,” he says. But really, he and Morris write music from their hearts without being concerned with genre, and incorporate everything from EDM to reggae in their sound.

“I want to be the soundtrack to the next generation,” Kadillac proclaims. “I’m not writing for a bunch of cool kids. I’m writing for the kid sitting in the hallway eating lunch; the kid that has the perfect family but just doesn’t fit into it; the people who feel out of place.”

He relays this message every time he’s onstage. Even live it’s just him and Morris, though he says they exude the energy of a six-piece band. That sense of solidarity has resulted in fans opening up to him about Neon Dreams helping them through their darkest days. “This is why I’m here,” Kadillac says, recalling the first time a fan told him they found solace in his music. “I’m not going to force people to live a better life, but when they want to feel better they have a place to go.”