We all know Vernon from The Voice SA - and he is coming to Mosselbay this December! For table bookings, or if you want to make sure you are seated next to your family and friends, contact us.

Vernon bares his sole in his debut pop album - “I want my music to reflect who I am as a person. I believe that when you are able to relate to the content of your songs, you are able to give a more authentic rendition when you sing them. I, therefore, chose tracks with a positive message that I could identify with,” reveals Vernon Barnard about his debut album, which has just been released. 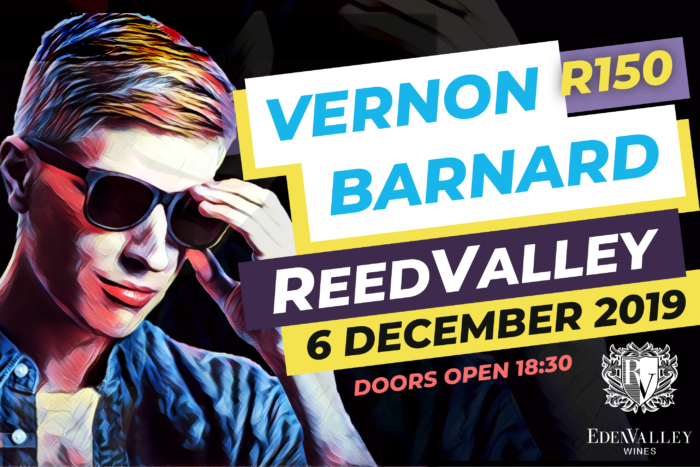 DEUR JOU OË is what Vernon supporters have been looking forward to from the moment that Bobby van Jaarsveld turned his chair on the reality program, The Voice SA. The album offers a striking combination of pop and alternative music, which audiences of all ages will be able to relate to.
Ten of the fourteen tracks on the album are original Afrikaans songs of which two, Onthou and Steunpilaar, were written by the star himself. It also boasts an English original, I Like It That Way, as well as three unique covers of existing crowd favourites, including Ed Sheeran’s Thinking out Loud and the song that launched his career, Story Of My Life. The video of his blind audition has not only been seen by more than 14-million viewers on YouTube, but also caught the attention of international stars like Ashton Kutcher. “The titular track of the album definitely has a suggestive connotation, but I also believe that we should try to put ourselves in someone else’s situation to be able to understand their perspective. Empathy is one of the greatest gifts you can have and one of the few things that can unite people,” he explains.

When asked about his favourite tracks on the album, he responds: “It is difficult to choose because there are so many nice songs. I want my music to take listeners on an exciting journey with each song. If I have to choose, I would list Jy is and Soekhart as my favourites. Both of the songs have a deeper meaning and is about searching for that person who completes you more than anyone else. Steunpilaar, the final track that was recorded, also has the potential to be a radio hit.”

Alles Om My, the next single off his new album, was written by Roux Cloete and William Loots, and boasts a catchy tune and meaningful lyrics that promises to satisfy even the most critical of ears.

All of the twenty-five-year-old singer’s previous singles were very well received. I Like It That Way, released in 2016, was named Song of the Year at OFM’s Music Awards in 2017, topped the charts of various radio stations and reached the number one position on Jacaranda FM’s Top 20. His first Afrikaans release, Daai Liedjie, still receives regular playtime and has recently been nominated as Song of the Year and Music Video of the Year at Bok Radio’s Bokkie Awards. Vernon was also nominated as Singer of the Year. Voel, his most recent release, did not only feature on the Top 10 on various radio stations, but also had a spot on kykNET’s Top 20. The star was also invited to sing the National Anthem at the opening ceremony of the test between South Africa and Ireland at Ellis Park in 2016 and lists it as one of this highlights of his career so far.

The singer has always loved music, but only discovered his talent at the age of nineteen. “I took part in a talent competition at my school because people encouraged me to pursue a career in music. After that first performance I knew that it was something I wanted to do for the rest of my life. Being part of The Voice SA has generated very good publicity for my career and I am thankful for the opportunities I’ve had since then,” he says.

He admires artists like Elvis Blue, Bobby van Jaarsveld, Brendan Peyper, Leah and Riana Nel and believes that Ed Sheeran has had a great influence on his musical style. “Although I am proud to be Afrikaans, my style, and interpretation of music, is influenced by various international genres such as Soul, R&B and Country. I believe that it is these elements that give my music and interesting sound,” he says.

The star’s main goals in life are to make music and to motivate those around him. “I am open for and look forward to each opportunity that comes my way and believe that you shouldn’t put limitations on that which you would like to achieve. I do not only want to dream big, but also want to believe big because nothing is impossible if you are willing to work hard.”

Vernon Barnard’s new CD is a collection of rhythmic feel-good music that is soft on the ear, and makes you think about love and life. His unique approach and soothing voice is like a fresh breeze in a genre that can be very ordinary. A bright future awaits this goal-driven artist and we cannot wait to see what he has in store for us next.